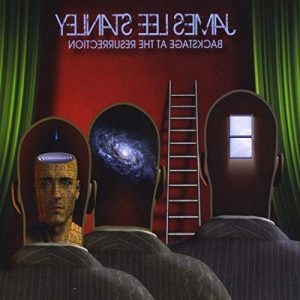 This is the latest from a gent who’s issued a lot of very fine LPs and CDs since 1973, and, like so many cats ‘n kitties from the days of olde, he gets nothing but better. In many ways, James Lee Stanley is akin to Iain Matthews, getting smoother and more enjoyable each release out, time being his pal and abettor—and lord knows he’s been a great tunesmith right from the start. Not only that, but steal a gander at who backs him up: John Batdorf, Severin Browne, Corky Siegel, Jim Photoglo, Ken Lyon, Dirk Hamilton, James Hurley … yow!! That much said, I’m not sure I need to write any more, but will.

Stanley’s usually slotted into the folk category, and that’s a good start, but, really, he’s a fine pop and mello-rock composer as well. Each LP and CD he’s issued has had at least several excellent charters, though they rarely got exposed well, the #1 complaint of the entire industry. Let’s Get Out of Here is an upbeat number with a burning guitar lead, something JP Jones or Kenny Loggins (in his less New Agey not-so-weepy days) might have concocted. John Batdorf, who duetted with Stanley for the surprising All Wood and Stones (here, a tribute to early Rolling Stones songs gone acoustic), appears as a key member of the backing band(s) and if you caught the debut Batdorf & Rodney LP from 1972, a long-lost treasure, then you know what that means.

Feather River Nocturne is something of a surprise, an instrumental, a form Stanley’s not often given to composing but most definitely welcome. In the vocal cuts, though, James Lee’s voice is as fine as ever, the backing harmony vocals fining his refrains out to a delicious degree. His subject matter is always folkish but to-the-moment while looking back, Do as You’re Told a clear demonstration of just that in a cool, settled-down, Little River Band-ish kinda cut. I’d say it’s my favorite, and it probably is, but there are so many excellent tracks here that I’m hesitant to single any out. I don’t want to think badly of myself.

This is about as good as it gets, folks, and the disc just re-proves my contention that independent labels are far outstripping the majors in terms of everything: quality, quantity, artfulness, whatever you’re looking for. If you’re tending to the radio for your music fare, you’re pretty much wasting time and need to be delving into material like Backstage at the Resurrection, switching to the CD deck for your sonic enrichment. You’ll thank me for this advice.

All songs written by James Lee Stanley
except Coming Out of Hiding (Stanley / Melamed).
Edited by: David N. Pyles
(dnpyles@acousticmusic.com)

Copyright 2010, Peterborough Folk Music Society.
This review may be reprinted with prior permission and attribution.